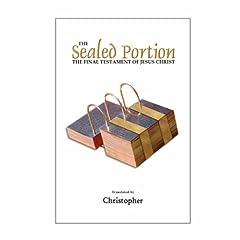 missing manuscript.  His website can be found here.  John the Beloved and the Three Nephites use him to present their message to the World.  Joseph Smith, himself, gave Christopher the Gold Plates so that he could translate the sealed portion of the Book of Mormon.  He believes that in 1987 he was called, in the same manner as Joseph Smith, to share a message with the world.  He believes that his organization is the only true message for the World today and has subsequently distanced himself from the LDS Church and actually sees his mission as undermining the power and influence of the Church.

‘The Sealed Portion – The Final Testament of Jesus Christ’ is published free online.  The book is 655 pages long with 100 chapters, each divided into verses, and there are even Chapter headings.  Stylistically the text is similar to the Book of Mormon itself.  But from my brief  overview here are few samples from his translation that interested me.

Christopher expands on the vision seen by the Brother of Jared, he writes “Behold this is the Kingdom and Glory of our Father.  It was on this world that our Father begat his posterity, even the spirits of all men which lived upon the world which thou standest.  And this was once a world like unto the world on which thou livest, and is where our father learned the mysteries and responsibilities of godhood.  And behold, it is upon this same world where the Mother of the Spirits of all the children of God reside with the Father” (TSP: 2: 12-3).

In Chapter 3 the Brother of Jared meets the Heavenly Father and his Heavenly Mother.  Here he provides the name of the Heavenly Mother.  This chapter shows that God practices polygamy.  Chapter 4 teaches how spirits are born from the various Heavenly Mothers.  In Chapter 8 we learn that Michael ruled Heaven when Jesus came down for his mortal ministry.  Furthermore we learn that “Michael is the other member of the Godhead, yea even the Holy Ghost” (TSP: 8: 17).  Michael can do this because when he died he refused to take upn him a resurrected body.

In Chapter 10 the details of the Endowment are shown to have been taught.  The text teaches that Joseph Smith was a Prophet and received the Endowment but because of the wickedness of the people he was taken from the Church and that the Lord left this people to their own devices.  As a result the Endowment would be changed from the pure form revealed by Joseph Smith.  The leaders after Joseph Smith will do this because they seek the praise of the world.  Christopher reveals that the Lord wants all people to have this endowment without any keeping of the commandments.  He then continues to give the endowment in detail in the text.  Christopher also provides us with a revealed understanding of the Endowment in his book Sacred, Not Secret.

He has also published his ideas regarding how to overcome world poverty on youtube.

Unfortunately I do not have the time to read the whole text.  I guess I did not feel particularly inspired by it.  However, has anyone ever heard anything from Christopher before?  Being from England I may be a bit late to the game.  On the FAIR site there are some cursory details about his life and some quotations from interviews he has given.  They also try to show that the translation is a forgery.

What do you think about the ideas that he includes at the beginning of the book.  I guess this raises important questions for us about how we can discern whether Christopher has a message for us.  I am not convinced, but I acknowledge that I am may be closed off from this.