I recently came across this story on the BBC Website and felt that I had to return to Mormon Matters to write a few comments about it.

Over the years I have noticed many similarities between Mormons and other religions, but I never thought I would see a similarity in this context with Judaism. This article addresses some of the main issues that people at Mormon Matters find challenging. Perhaps we, as doubting Mormons are not as alone as we feel. 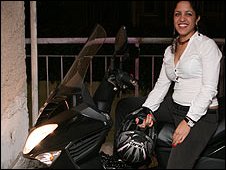 28 year old, Chani Ovadya, is interviewed about her experience. She does not give an explicit disgruntlement with the community but she does make mention of the fact that she felt more feminine then the community let her be. She says that:

“It was the hardest year of my life, and I didn’t have my parents and family who I love with me, so it was even worse…As a religious woman, the most you can be is a teacher, now I am following my dreams.”

She makes a point that she wants to make the transition easy for her family because she still cared so much for them, but all they could say to her in return is “Why have you killed us?” Jeff Spector told me:

“Children who have left the faith or married outside the faith would be considered dead to the family. The families would rend their clothes and sit Shiva, which is the Jewish mourning period of one week.”

One thing I notice from the accounts is that most people that have left do not openly belittle or degrade the people they have left behind, they still have love for them, they still feel a part of their community though they are caught in this impossible dilemma.

“In one case she knows of, a father who told his daughter he would rather kill her than see her become secular. She eventually committed suicide.”

This story seems quite harrowing given the fundamentalist strains that can also be found within Mormonism and its affect on our own brothers and sisters in the faith who are caught between worlds.

An example of a young gay Mormon who felt that he was caught between worlds was that of Stuart Matis. Before committing Suicide he wrote to The Daily Universe:

“I implore the students at BYU to re-assess their homophobic feelings…Seek to understand first before you make comments. We have the same needs as you. We desire to love and be loved. We desire to live our lives with happiness. We are not a threat to you or your families.”

The article ends with a very understanding and warm rabbi named Ido Lev. He says:

Generally speaking, a person leaves because we failed in some way in our responsibilities to him. And he hasn’t had a satisfactory life and he is looking for greener pastures elsewhere because it is not good for him here. We take responsibility for this because it should be good for him here…it breaks peoples hearts. I don’t see any reason not to speak to your children. I don’t see any reason not to be there for your children if they need you.”

I urge that we, like Rabbi Lev, seek understanding, compassion and love before judgment. I suplicate that we do not fail in our responsibilities to our brothers and sisters who are caught between worlds. It really is heartbreaking for all who don’t feel they belong. To partly paraphrase Rabbi Lev, “It should be good for everyone in our church” as well, no matter what they believe. They should all feel welcome in our community. Let’s help those who are a part of our communities and who have doubts feel that they DO belong.