OT SS Lesson #2
This was an interesting lesson to read after last year’s brou-ha-ha over an alleged “generals in the war in heaven” quote. On the 25th of February 2008, the Church issued an official statement from the Office of the First Presidency to all General Authorities, Area Seventies, Stake Presidents, Mission Presidents, District Presidents, Temple Presidents, Bishops and Branch Presidents which read:

A statement has been circulated that asserts in part that the youth of the Church today “were generals in the war in heaven . . . and someone will ask you, ‘Which of the prophet’s time did you live in?’ and when you say ‘Gordon B. Hinckley’ a hush will fall, . . . and all in attendance will bow at your presence. [You were held back six thousand years because you were the most talented, most obedient, most courageous, and most righteous.]”*

This is a false statement. It is not Church doctrine. At various times, this statement has been attributed erroneously to President Thomas S. Monson, President Henry B. Eyring, President Boyd K. Packer, and others. None of these Brethren made this statement. Stake presidents and bishops should see that it is not used in Church talks, classes, bulletins, or newsletters. Priesthood leaders should correct anyone who attempts to perpetuate its use by any means, in accordance with “Statements Attributed to Church Leaders,” Church Handbook of Instructions, Book 1 (2006), 173.

Although this is not Church doctrine, I don’t see much which distinguishes it from the following quotation in our approved Sunday School Lesson #2:

“God has held you in reserve to make your appearance in the final days before the second coming of the Lord. Some individuals will fall away; but the kingdom of God will remain intact to welcome the return of its head — even Jesus Christ. While our generation will be comparable in wickedness to the days of Noah, when the Lord cleansed the earth by flood, there is a major difference this time. It is that God has saved for the final inning some of His strongest children, who will help bear off the kingdom triumphantly. …

“… Make no mistake about it—you are a marked generation. There has never been more expected of the faithful in such a short period of time than there is of us” (The Teachings of Ezra Taft Benson [1988], 104–5).

I’ve been scratching my head all evening wondering why the Church would come out so emphatically against the “generals in heaven” quote, denouncing it as false doctrine, and yet retain these very similar teachings in the manual. I suppose it might be because of the notion that someone in heaven would bow to anyone other than a member of the Godhead; however, if we become gods when we are exalted that’s not as heretical as it seems. Perhaps the problem lies in the substitution of being chosen as a heavy responsibility for a kind of entitlement or specialness. But this is very subtle. The entire Sunday School lesson, based on Abraham 3 and Moses 4:1–4 expounds our own unique spin on Calvinism and the doctrine of election. In the vision recorded in Abraham 3, the Lord showed Abraham the Council in Heaven that was held before the earth was created. Present at the Council were “many of the noble and great ones,” including (as enumerated in D&C 138) Adam, Eve, Abel, Seth, Noah, Shem, Abraham, Isaac, Jacob, Moses, Isaiah, Ezekiel, Daniel, Elias, Malachi, Elijah, Nephite prophets, Joseph Smith, Hyrum, Brigham, John Taylor, Wilford Woodruff, “and other choice spirits who were reserved to come forth in the fulness of times.” These spirits, the lesson teaches, were foreordained to do important things for the kingdom of God during their mortal lives. Including ourselves in that list of scriptural V.I.P.s is heady nectar.

That’s a very careful word — “foreordination.” We teach that even though a person is foreordained to a calling, that calling is dependent on the person’s worthiness and willingness to accept it. We may have been righteous in the premortal “first estate,” but that doesn’t guarantee the keeping of our second estate here on earth. In this way, we stay a pace away from predestination. But foreordination is a loaded word for twentieth-century Mormons.

Episode 22 of Season 7 and the series finale of Buffy the Vampire Slayer is titled “Chosen.” In this episode Buffy comes up with a plan which involves Willow performing a difficult spell. The magic activates Potentials all over the world, defying the tradition of only one Slayer per generation. As the screen shows a montage of young women, Buffy’s voice-over says: 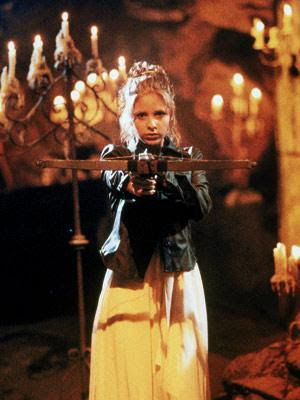 From now on, every girl in the world who might be a slayer…
A young woman stands at the plate staring at the pitcher, waiting to bat. She looks a little nervous.

will be a slayer.
A young woman breathes heavily as she leans on her locker for support.

Every girl who could have the power…
A young woman is lying across the floor, having fallen out of her chair.

will have the power… can stand up,
In a Japanese-style dining room, a young woman stands up at family dinner.

will stand up.
A young woman grabs the wrist of a man who’s trying to slap her face, preventing him.

Slayers… every one of us. Make your choice.
The girl at the plate changes from nervous to confident, smiling as she waits for the pitch.
Are you ready to be strong?

This scene gives me the same kind of feeling I used to have as a young adult, when countless Church leaders spoke to groups of us telling us that WE were the chosen, saved for the Latter-Days, to prepare the world and usher in the Millennium. That’s the feeling I got when I heard the word “foreordination.” It still gives me shivers, thinking about it. I wasn’t a member yet, but in 1970 I was 11 years old when President Joseph Fielding Smith declared: “Our young people … are the nobility of heaven, a choice and chosen generation who have a divine destiny. Their spirits have been reserved to come forth in this day when the gospel is on the earth, and when the Lord needs valiant servants to carry on his great latter-day work.” I was part of that generation. But then I had children, and they grew, and became the Youth of Zion themselves, and suddenly the leaders were telling THEM they were the marked ones. “This is the greatest age in the history of the world, and its youth are a chosen generation,” President Hinckley told them in 1995. And then in November, my daughter brought forth my firstborn grandchild, and a third generation is beginning to rise up since I heard those words.

OT SS Lesson #2 states that its objective is “To help class members understand the doctrine of foreordination and their own responsibility to help build up the kingdom of God and bring souls to Christ.” Do you think this is the intended meaning of the scripture block in Abraham 3, Moses 4, and D&C 138? Do you think you were part of the Council in Heaven described there? Does the doctrine of foreordination as you have been taught it give you a sense of specialness and entitlement? Were you taught you would usher in the Millennium? Do you feel your day of being a chosen generation of youth has passed you by?