When I first discovered that BYU had announced the closing of their Women’s Research Institute, I was appalled, as were many interested parties both on campus and off. I sat down immediately to write a post on the subject, but soon I was brought up short. On Tuesday, when I heard the news, there were exactly two sources of information on the subject. One was a short article at “Square Two,” written by anonymous parties connected with the WRI. The other was the terse news release on the BYU website. Neither of these sources gave enough information for me to form an opinion on whether I supported or disagreed with the change, or for that matter, what exactly the change would entail. Later articles in the Tribune and Deseret News as well as several blog posts (BCC, Ex2, FMH) gave additional tidbits of information and different perspectives. A facebook group was formed called “Save BYU’s Women’s Research Institute.”

Since I am currently visiting Provo from out of town, I determined I would poke around to see if I could clarify this odd move on BYU’s part. Last night I attended a meeting of the campus group “Parity,” a club dedicated to equality between men and women within LDS doctrine, where they discussed the closing of the WRI and brainstormed ways to protest the action. The meeting simply added to the questions I already had.

It seems to me that there are reasons to move cautiously in protesting this change in status for women at BYU. Placing the Women’s Studies minor under the Sociology Department in the College of Family, Home, and Social Science (FHSS) might be just what is needed to build the program and give it more legitimacy than it currently has. Between 6 and 8 students per year minor in Women’s Studies (of a student body of approximately 35,000). There are five classes offered by the minor, along with courses from other departments which are required or suggested. All of these classes combined serve a total of about 2000 students, many of whom are taking the classes as requirements for Psychology, Sociology, Home and Family Living, or Food Science. 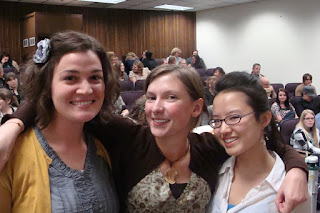 Co-presidents of Parity Ellen Decoo and Hwanhi Chung ran the meeting and expressed concerns strongly and articulately with the input and added direction of sociology major Sara Vranes. Present at the meeting were 78 students, not more than 5 older community members, and one male faculty member, who did not comment. The organizers called for caution in expressing concerns, coming from prior experience that “activism has to be done differently at BYU.” The most overtly feminist statement came from a male student, who commented that this was “one more example of the closed decision-making process at BYU by an exclusive board of white males.” He was quickly shut down by female voices throughout the room, who said, “we have to be realistic, we’re at BYU, we have to work with where we’re at.” 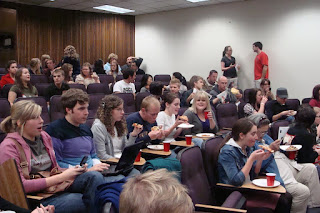 Although it is still unclear exactly who was involved in the decision to close WRI or how it was made, at least one woman was a member of the internal review board which initiated the process. Renata Forste, who will administer Women’s Studies beginning in January, gave a 45 minute interview to BYU student and protest organizer Sara Vranes during which she explained her plans to form an interdisciplinary committee in an attempt to bring together aspects of women’s research which will now be fragmented into different areas around the University. The students are concerned that budgets and programs will be cut or less accessible, and that professors who are already overstretched will be unable to accomplish a comparable program to that which was offered under the previous director, Bonnie Ballif-Spanvill. (Ballif-Spanvill’s PhD is in Educational Psychology and her research interests and publications have focused on gender issues, community development, nonviolence and conflict resolution. Forste’s PhD is in Sociology and her research interests and publications are in the areas of fertility, infant and child survival, breastfeeding, patterns of family formation, and fatherhood.) The members of Parity are concerned about the message that this symbolic action sends to students, faculty and the world about BYU’s attitude toward women. But most of all, they are feeling that their voices are not heard. Students were unable to secure interviews with school administrators to discuss the issue, and were told they “did not have a good enough reason” to merit interviews with John Tanner, David Magelby, or Cecil Samuelson. Some of the suggestions for protesting included a “Day of Silence” and a “Die-in,” which to me eloquently expressed their feelings of disempowerment. On the other hand, professors such as Clyde Robinson believe that the move is merely an efficient use of resources. “The university couldn’t justify having an independent institute for women’s studies,” he told me, “because women’s issues and gender studies are researched all over campus in many different departments.”

As I have researched the details of BYU’s reorganization of Women’s Studies, I have discovered a pattern. Many programs have recently been absorbed into broader areas of administration. For example, in 2005 the Smith Institute was dropped from BYU and relocated in the Church History Department, with various academic departments at BYU to continue research in church history topics. In August of 2009 the Health and Human Performance Department was discontinued and the departments and programs were realigned with other colleges including Fine Arts, Life Sciences, and Management. Under the administration of David Magelby, the Dean of FHSS,the Social Work major was discontinued in 2007 after a year-long study which suggested that undergraduates major in psychology or some related field and then complete a graduate degree in Social Work (which has been retained at BYU). A commenter on the Tribune article, sms35, articulates the concerns about Magelby’s approach:

The administration I think made a poor move on this. It has nothing to do with the LDS Church. The Dean does not like interdisciplinary programs bottom line. So while I think that there is a small component against women here, I do not believe that this is about the position of the women in the church per se.

The main problem is the Dean has no clue why it is so important. In my opinion he looks at the research that is done there and believes that it can be just as easily done by the people in their own departments. This is simply not true. The WRI was intrumental in organizing all of the efforts that we as individual researchers tried to accomplish. It would not have been as easy, or even possible without the WRI.

And that is just internal to BYU, outside of BYU it was fantastic to visit with other scholars and tell them you were a part of the WRI and BYU. It was a major factor in convincing other scholars that their perception of BYU as misogynistic were ill founded.

The WRi was always more than just the WomanStudies program and the research. It was also a very powerful message to the world that the LDS church took women seriously. It was never a huge organization, but it was growing and now, just as it was gathering the needed momentum this happened.

I am hoping that further information is forthcoming from BYU about how the change will “streamline and strengthen” Women’s Studies at the university. The public does not seem to understand how elimination of the WRI will strengthen research in Women’s Studies at BYU. The following are questions which are still unanswered: