I have often thought that had I not joined the Church at age 19 I would have liked to have joined a kibbutz in Israel, or to have lived on “the Farm” in Tennessee (back when it was more hippie-like), or at least to have been a part of an intentional community. As I began investigating the LDS Church, and in particular reading the passages in Moses under consideration in our Sunday School Lesson #5, I was drawn to the strong emphasis on cooperative community which began under the direction of Joseph Smith and continued in Utah under Brigham Young and survived even to the present day.  I expected to be instructed in the principles of consecration and called upon to live them more and more as the “latter day” rolled on.

We do have our temple covenants to consecrate our time, talents and means to the Church in order to establish Zion.  Most twenty-first century Latter-day Saints would say that this Law of Consecration is very different than the “United Order” experiments which were undertaken in various ways in the early days of the Church.  We can live the Law of Consecration, they say, by generous payment of our tithes and offerings, and serving in the Church.  But here’s where my fundamentalist streak comes out.  All around me I see Mormons who are saturated in capitalism and as far as can be from my conception of the Enoch-founded City of Zion.  I long to experience an Orderville, a Bunkerville, or even a  Morley farm.  I’m inspired by early accounts of the communitarianism of Jackson County, and I share the bit of longing which resides deep in almost every Latter-day Saint heart to return there in preparation for the Millennium.  Where is our Brigham City, our Kingston, our Kanab?  Even ZCMI and most of our welfare farms have slowly passed away.  Is D&C 42 no longer applicable in our modern world?

Mormon teachings on Enoch and the City of Zion lend a fascinating patina to this yearning of mine.  It is often pointed out that Enoch receives a scant 6 verses in Genesis, 1 in Jude and 1 in Hebrews. But the book of Moses in the Pearl of Great Price enlarges greatly upon his story.  Here we learn about a man who walked and talked with God — who, when he spoke the words of God, the people trembled and could not stand in his presence.   He drew these people together and made them into a community among whom God himself could dwell.

Reading about Enoch is a reminder of the impetus which let to the collectivist communities of early Mormonism.  The best that is in our people leads us to dream of achieving income equality, eliminating poverty, and increasing group self-sufficiency, to the extent that we will be taken up by God to meet the faithful Saints of Enoch’s day and the Church of the Firstborn.

“And it came to pass in his days, that he built a city that was called the City of Holiness, even Zion…And the Lord called his people Zion because they were of one heart and one mind, and dwelt in righteousness; and there was no poor among them”

Additional Mormon folklore is fascinating for me to peruse as I compare my desires for utopia with those of the early Saints. The Autobiography of George Laub, for example, elucidates the early view of some Mormons that Zion was taken up slowly into heaven, remaining visible in the distance for quite some time. Thus, one of the purposes for building the Tower of Babel was to attempt to reach this higher state: 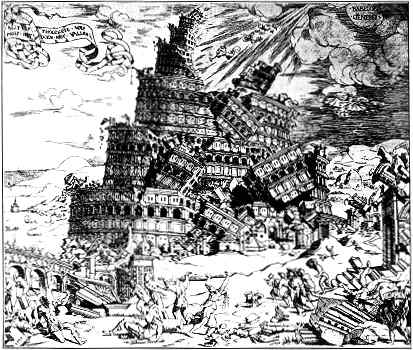 “Now I will tell the designs of building the tower of Bable. It was designed to goe to the city of Enoch, for the veil was not yet so thick that it hid it from their Sight. So they concluded to goe to the City of Enoch, for God gave him place above this impure Earth. For he could breath a pure air & him and his City was taken, for God provided a better place for him for they was pure in heart. For it is the pure in heart that causes Zion to be & the time will come again to meet, that Enoch and his city will come again to meet our city & his people, our people, & the Air will be pure & the Lord will be in our midst for Ever.”

Sometimes I feel positively Nimrod-ish — coveting that city in the air and yet feeling the pull of the fleshly Babel.

It seems I’m not the only Latter-day Saint who is drawn into flights of fancy when contemplating the story of Enoch and his city.  Here’s another speculation:

“The people, and the city, and the foundations of the earth on which it stood, had partaken of so much of the immortal elements, bestowed upon them by God through the teachings of Enoch, that it became philosophically impossible for them to remain any longer upon the earth; consequently, Enoch and his people, with the city which they occupied, and the foundations on which it stood, with a large piece of earth immediately connected with the foundations and the city, had assumed an aerial position within the limits of our solar system; and this in consequence of their faith.” (History of the Organization of the Seventies, Salt Lake City: Deseret News, 1878, p. 11.)

Closely aligned with this is the statement imputed to Joseph Smith that “when the City of Enoch fled & was translated it was whare the gulf of Mexico now is. It left that gulf a body of water.”

The image is deeply moving — what an empty place is left on the earth with the fleeing of Zion !  As well,  there’s an empty place in our Mormon teachings when we take away the “United Order” conception of  the Law of Consecration.

As we cover these scripture passages in upcoming Sunday School classes, are you feeling satisfied with the efforts that the twenty-first century Church is making to live the Law of Consecration by tithes and offerings, humanitarian services, and a few  projects such as the Perpetual Education Fund?  Or do you miss the days of closer member involvement and hands-on work with area welfare farms, cattle ranches, and peanut-butter factories?  Dare I ask — do you ever cast an eye toward Short Creek and their “house built in a day?”  Every once in a while, like me, do you get an urge to see if you are made of celestial material by marching in to your Bishop’s office and throwing down your bank card, the deed to your house and title to your car?