“The Genesis passage is very clear, that the sin of Sodom that brought on the destruction of the city was indeed linked to homosexuality.” (R. Albert Mohler Jr., president of the Southern Baptist Seminary)

“Saying that the last recorded acts of the Sodomites — the demands for same-gender sex — are proof that they were destroyed for homosexuality is like saying that a condemned man cursing his guards on the way to his execution is being executed for cursing the guards. Sodom was judged worthy of destruction before the incident with Lot and the angels.” (Inge Anderson, “Sins of Sodom“)

One of the prominent themes in this week’s Sunday School lesson is the story of Lot and the destruction of Sodom and Gomorrah. But in Christian thought there has been some controversy over how closely the story should be linked to homosexuality, as the quotes above indicate. There are several points that are up for grabs, and I’m not sure either side has a complete understanding yet. Read on, and let me know what you think!

The background of the story should be taken into account as we try to figure out what is happening. In Genesis 18, three angelic messengers visit Abraham to prophesy about the birth of his son and to warn of the destruction of Sodom and Gomorrah. This is the part where Abraham shows his compassion by bargaining with the Lord for a stay of execution if there are 10 righteous people to be found in the city. The narrative shows that the destruction has already been decreed, even before Lot’s experience with the men of Sodom.

Next, the angels enter the city. That Lot meets them at the gate is significant. Though a resident alien, Lot is taking a turn guarding the walls. Sodom has been at war, and not surprisingly the inhabitants of the city are wary of visitors. The very night a non-native of the city is trusted to watch the gate (thus controlling traffic in and out), he lets two people that nobody knows into the city and what’s more behind closed doors for the night in his house! Certainly this raised some eyebrows and caused some suspicion. Soon the residents of Sodom — all the people, both young and old — have gathered outside of Lot’s house and are demanding that Lot bring the visitors out “that we may know them.”

The meaning of the Hebrew word yada’ (to know) has engendered much of the controversy behind this story. The word has a euphemistic meaning (to engage in coitus). Of 943 times yada’ is used in the Old Testament, only ten times is it used with a sexual connotation, and all of these are heterosexual coitus. Thus some have conjectured that the townspeople were merely asking to know the credentials and intentions of strangers in their city. On the other hand, when yada’ is used with a sexual meaning, a large number of those references occur within the book of Genesis. In fact, the word is used in a clearly euphemistic sense in Genesis 19:8, just three verses after the reference in question.

The absolute sacredness of a guest was a principle well known in the Middle East. Lot wanted to protect his guests, and he refused to hand them over to the crowd. When the crowd insisted, he offered his two daughters as the most expedient diversion for a hostile situation. In the Joseph Smith Translation of these verses, it is suggested that Lot did not offer his daughters, but that the Sodomites demanded the girls as well as the visiting angels. But there is another story in the Bible which parallels the Genesis story. It is found in Judges 19:13-27. In this account, the house guest was a man, not an angel, and the master of the house offered his daughter and the man’s concubine to the mob. They accepted the concubine woman in place of the man, and raped her until she died. The city was destroyed — for heterosexual rape and violation of the law of hospitality. In spite of this very similar destruction of a city, no one condemns heterosexuality on the basis of this passage, but rather there is condemnation of rape.

This may indicate that the story of Sodom in Genesis has little to do with homosexuality and more to do with rampant, violent sex as well as irreverent attitudes regarding sex. Sodom’s primary sin was violence. The threat against the messengers and Lot’s daughters is a threat of sexual violence in which sexual orientation is irrelevant. The behavior of the people of Sodom wasn’t about attraction. It was about harming people as profoundly as they could. One might conclude that gang raping some guys is a pretty serious sin, no matter how you look at it. Making the sudden leap to compare them to committed monogomous gay couples, however, is outrageous and unfounded. There is no real similarity, and indeed, our modern Western view of “sexual orientation” did not exist in ancient Biblical times.

Another method of uncovering the meaning of the lesson of Sodom is by looking at how other Biblical passages interpret the story. Throughout the Old Testament, Sodom is held up as a lesson in wickedness that deserves utter destruction for reasons other than homosexual acts. Of the eighteen passages outside of the story itself found in Old Testament writings none refer to same sex activity, and only one alludes to sexual immorality (namely, adultery). To cite a few examples of those found among the words of the Hebrew prophets, Isaiah (1:1-17; 13:1-22) refers to Sodom and Gomorrah to condemn general evil and injustice; Jeremiah (23:9-15), to general moral and ethical laxity. Ezekiel (16:46-56) and Amos (chapter 4) condemn the kingdoms of Judah and Israel, more specifically, for neglecting the poor and needy.

“Behold, this was the iniquity of thy sister Sodom, pride, fulness of bread, and abundance of idleness was in her and in her daughters, neither did she strengthen the hand of the poor and needy. And they were haughty, and committed abomination before me”

The Deuterocanonical books identify the sin as pride and inhospitality; in Wisdom 19:13-14, we read “…whereas the men of Sodom received not the strangers when they came among them.” In Ecclesiasticus 16:8 the sin is recognized as pride. In the New Testament, too, there is reference to Sodom’s sins: In Matthew 10:14-15 and Luke 10:10-13, Jesus implied that the sin of the people of Sodom was to be inhospitable and to reject the words of the gospel messengers.

It’s not until the very late books of 2 Peter 2 and Jude 6, that “sexual immorality” and “depraved lusts” are considered sins of Sodom. In 2 Peter especially, the author seems to be drawing a comparison between “the sons of God” who came down to earth and mated with “the daughters of men” (see Lesson 6), and the men of Sodom who attempted to do sexual violence to the divine visitors whom Lot invited into his home. The comparison is that there was an unnatural mating, or attempt at a violent sexual act, between a divine being and a human being. The first acts lead ultimately to destruction by a flood, the second attempted act to destruction by fire.

A final consideration for the Latter-day Saint might be the words of modern Prophets and Apostles upon the matter. I will only include a few quotations here, but they are enough to demonstrate that there is a lack of consensus upon why the cities of Sodom and Gomorrah were destroyed, and whether or not it had to do with homosexuality. Joseph Smith preached:

“In consequence of rejecting the Gospel of Jesus Christ and the Prophets whom God hath sent, the judgments of God have rested upon people, cities, and nations, in various ages of the world, which was the case with the cities of Sodom and Gomorrah, that were destroyed for rejecting the Prophets.” Teachings of the Presidents of the Church: Joseph Smith, 192–205. From a discourse given by Joseph Smith in Nauvoo on Jan. 22, 1843.)

In contrast, Spencer W. Kimball unequivocally equated the sin of Sodom and Gomorrah with homosexuality:

“We hear more and more each day about the sins of adultery, homosexuality, and lesbianism. Homosexuality is an ugly sin, but because of its prevalence, the need to warn the uninitiated, and the desire to help those who may already be involved with it, it must be brought into the open. It is the sin of the ages. It was present in Israel’s wandering as well as after and before. It was tolerated by the Greeks. It was prevalent in decaying Rome. The ancient cities of Sodom and Gomorrah are symbols of wretched wickedness more especially related to this perversion, as the incident of Lot’s visitors indicates. (Spencer W. Kimball,The Foundations of Righteousness,” Ensign, Nov 1977, 4)

Ezra Taft Benson taught that pride was the sin which caused the city of Sodom to be destroyed:

“The scriptures abound with evidences of the severe consequences of the sin of pride to individuals, groups, cities, and nations. ‘Pride goeth before destruction.’ It destroyed the Nephite nation and the city of Sodom.” (Ezra Taft Benson, Beware of Pride,” Ensign, May 1989, 4.)

More in line with Ezekiel, Neal A. Maxwell considered Sodom’s sin to be neglect of the poor and needy:

Perhaps in this post I have taken the long way around to show that, while I don’t think that homosexual orientation can be blamed for the destruction of Sodom and the cities of the plain, there are several valid interpretations of this passage. Additionally, there are many questions we don’t have good answers for. Why did Lot offer his daughters in place of the heavenly visitors, and why was he not condemned for this action? Of the entire city of Sodom, were there not children under 8 years old, and possibly others who were innocently killed in the destruction? Is it possible to connect the several sexual relationships which seem to run through the scripture block comprising Genesis 18-19? What are the symbolic meanings of the characters and actions? The story is so ambiguous that perhaps every reader comes away with a different perception of the lesson to be taught. I have illustrated that point by including below some art work, each with its own unique depiction of the destruction of Sodom and Gomorrah. 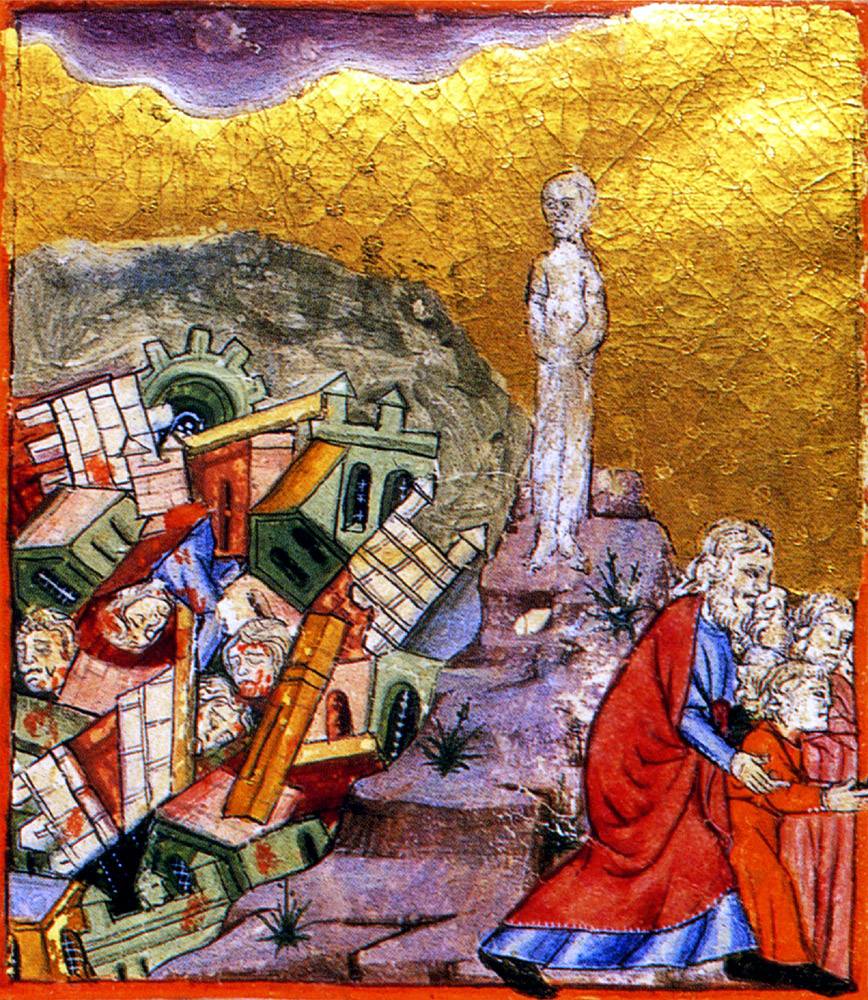 The Destruction of Sodom and Gomorrah, c. 1320

Albrecht Dürer
Lot and His Daughters Alessandro Bavari
The City of Sodom