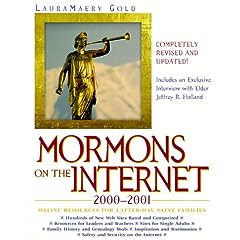 I have to admit sadly if it came to push or shove Mormon Matter opinions and the Internet in the main override what information I would receive from a member of my congregation. Primarily because it’s a collective think tank that has looked at it from different angles and in more depth.

Since Mormon Stories, Mormon Matters, For those who wonder.com and a plethora of others that have come into my view it has significantly changed my insights of what I thought was black and white dramatically.

Cognitive Dissonance: A condition of conflict or anxiety resulting from inconsistency between one’s beliefs and one’s actions, such as opposing the slaughter of animals and eating meat. I personally love cognitive dissonance! It is in fact how real life is and I think the Internet Chapel provides the real life church where thoughts are free and open and you don’t have to hold your opinions back.
Virtual Church: “Don’t act like you haven’t thought about it already.” I have never met any of you personally except for Stephen Wellington and John Dehlin. But I do have daydreams of a Cognitive Dissonance virtual chapel with you guys.

If I left anyone out don’t feel bad you simply weren’t in my daydream!

• Is this an accurate view of us?
• What could have been added?
• Is there a growing trend in our community of Internet Mormons?
• Is your ward or branch as stimulating as the Internet Chapel?