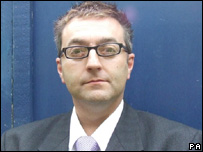 John Reaney took the Hereford diocesan board of finance to an employment tribunal after his appointment as a youth worker was blocked. 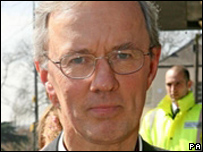 Bishop of Hereford Anthony Priddis has apologised and gay rights group Stonewall said the “substantial compensation” sent a clear message. Mr Reaney, from Colwyn Bay, Conwy, said he was delighted the case was over. “Lesbian and gay Christians working within the Church of England are entitled to be treated with humanity,” said Mr Reaney, 42.

Mr Reaney applied for the vacant post of youth officer within the Hereford diocese in May 2006. During the tribunal in April 2007 Mr Reaney said the members of the eight-strong interview panel had recommended him for the job and the appointment just needed the approval of the bishop. During a two-hour meeting in July, Mr Reaney claimed the bishop questioned him about a gay relationship.

Three days later the bishop phoned him to say he had been unsuccessful. In his evidence to the original tribunal, Bishop Priddis said anyone in a sexual relationship outside marriage would have been rejected. However the tribunal last month ruled Mr Reaney, who now lives in Cardiff, had been discriminated against “on the grounds of sexual orientation”.

Bishop of Hereford Anthony Priddis has apologised.  Stonewall chief executive Ben Summerskill said: “We’re delighted that the tribunal has sent such a robust signal, both to the bishop and other employers. “The substantial level of compensation sends out a very clear message. Not even a bishop is above this law.”

The award is made up of £7,000 damages for psychiatric injury, £6,000 for injury to feelings, £25 for costs incurred in seeking work, £1,320 cost of counselling, £25,000 for future loss of wages and £8,000 for future pension loss. Anni Holden, spokeswoman for the diocese of Hereford, said the legal costs of the case to the diocese were being met by an anonymous donation. “We are glad we can draw a line under this unhappy situation. It has been a difficult time for all of us involved in the tribunal,” she said. “It has been a long drawn-out process and we are pleased that it is finally complete. “We are now aware that when making such an appointment we must make it clear if it is a genuine occupational requirement that the post-holder should believe in and uphold the Christian belief and ideal of marriage, and that sexual relationships are confined to marriage. This is the crux of the matter, not sexual orientation.”

What sort of impact could this have on homosexual Mormons in the UK who are seeking jobs within the Mormon community such as temple workers, CES etc.?    Could the requirement for a temple recommend as part of a job be discrimination?