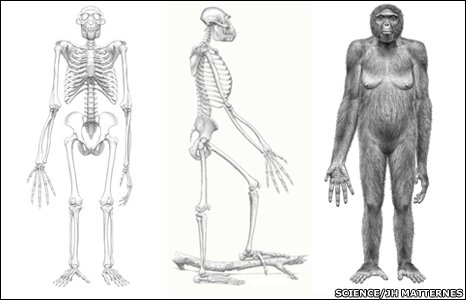 With the advance of science and the study of more and more artifacts such as Ardipithecus ramidus, believing Mormons are faced with a challenge which becomes stronger with each discovery. Although the Church has never taken a firm doctrinal stance on the mechanics of evolution, there has been an authoritative definition on the nature and origin of man. In 1909 a First Presidency statement was issued entitled “The Origin of Man.” This statement defines the Church’s position that

Faced with the difficulty of reconciling human origins based on an evolutionary model and a very real Adam who was created from the dust of the earth, Latter-day Saints have responded in a number of ways. Recent generations of Mormons have become increasingly willing to embrace symbology as a viable alternative of interpreting the scriptural record. Instead of viewing Adam or Noah as literal human beings, their stories are seen to embody spiritual truths from which we can learn helpful principles. The scriptural record is seen as archetypal and may be based on events which are more limited than they aver. Writings about Noah and the flood which accept this approach can be seen here and here. Adam is more problematic, because of the role he plays in LDS eschatology as a literal priesthood leader who will return in his physical body to preside at Adam-Ondi-Ahman.

There are at least three options that believing Latter-day Saints have in considering the Adam and Eve scriptures. First, we can accept them as historical persons. This necessitates either rejecting the scientific evidence as incomplete or incorrect; or compartmentalizing our beliefs so that they don’t need to be reconciled. If you find yourself within this category of belief, how do you deal with discoveries such as “Ardi?” Are you more likely to “put it on the shelf,” or do you turn to creationist apologetics?

Another choice is to see our First Parents as purely symbolic figures — fictional characters in a fictional story that intends to teach theological truths about God and humanity. This can be a deeply satisfying endeavor, and is even supported by instructions in the Temple that we are to see our First Parents as “simply figurative.” If we subscribe to this option, however, we must revise our eschatology and relegate the Adam of the Last Days to symbolic status as well. If you are in this camp, are you ready to give up the Adam who will physically return to the American Zion holding the keys to his dispensation? And what do you do with the many authoritative statements describing this event?

Lastly, we may view Adam and Eve as representative figures — a pair of hominids who God miraculously modified into the first homo sapiens about 150 thousand years ago. This theory has promise because it works with modern science, the scriptural account, and last days theology. It certainly has a great appeal to the modern Mormon armchair theologian.  However, it does not jibe with the First Presidency statements on the origin of man, which pointedly specify that human beings did not evolve from lower orders of the animal creation. There is no precedent for this train of thought, and adherents must weave a new hypothesis ex nihilo.