This is the story of forgiveness. 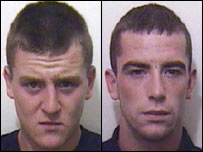 This is a story of a young 18 year old man named Anthony Walker who was beaten to death with an ice axe back in 2005 because of the colour of his skin. The two murderers, Michael Barton 17 and Paul Taylor 20 were found guilty and put in jail for a minimum of 20 years.

The Judge, Mr Justice Leveson, told Taylor and Barton the attack was “a racist attack of a type poisonous to any civilised society”.

The reactionary part of me thinks “Put these murderers to sleep with some sodium thiopental!”

But Anthony’s mother, a devout Evangelical Christian, has shown me an example that I feel shows the discipleship of a true Christian. Gee Walker saw Anthony in hospital with the axe sticking out of her sons head. The images will probably resonate forever. She is the mother of 6 and has lost a son who she said would not harm a fly and had great ambitions to be a lawyer when he grew up.

Gee Walker said in answer to the question “Do you hate Barton and Taylor?

Gee: I can’t hate. I brought up my children in this church to love. I teach them to love, to respect themselves, and respect others. We’re a huggy family and they go out and portray that same image. We’re a forgiving family and it extended to outside, so it wasn’t hard to forgive because we don’t just preach it, we practise it. It is a life sentence. What does bitterness do? It eats you up inside, it’s like a cancer. We don’t want to serve a life sentence with those people.

Has your faith been tested by Anthony’s death?

Gee: (Laughs) Has my faith been tested? Lord, yes. My name’s Gee, not Jesus! It’s been hard, so hard, but I have to follow what the Lord teaches. It is easy to say those things, but when it is you who must do them, it is hard.

I hope we can all learn from people like Gee Walker and be peacemakers. I hope that Anthony’s murders also learn from her example.